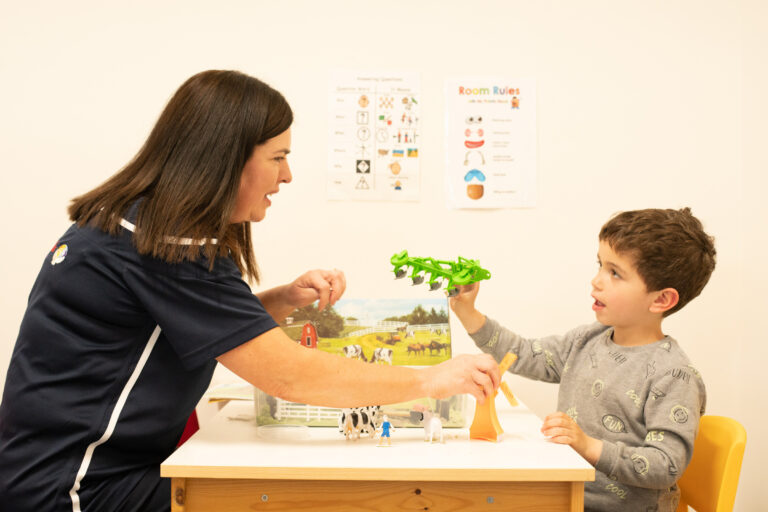 Four-and-a-half-year-old Theo Lage benefits from the services of Sensational Kids in Claremorris. Theo attends Speech and Language therapy sessions with Speech and Language Therapist Maureen Byrne. Discussing her work with Theo, Maureen says: “As a Paediatric Speech and Language Therapist, I really enjoy working with children like Theo to improve their speech, language and communication skills. Theo has a diagnosis of autism, and I began working with him back in December 2020. Theo’s parents were concerned about his delayed speech, he had approximately twenty single words at the time, difficulty following directions and he was having a tough time with transitions. After four months of speech and language therapy, Theo was discharged from the service and at that point he was using phrases, he was following directions, transitions were a lot smoother, vocabulary had increased and overall, Theo had progressed in his expressive and receptive language. His parents were very happy and thought that was a good time to take a break.”

Theo returned to the service recently when his parents observed issues with fluency. Discussing this, Maureen says: “Although he was doing very well, they noticed he was having difficulty with the flow of his speech, especially when he was excited or frustrated. During our current therapy cycle, we have been working on strategies of awareness and pacing, while looking at factors that potentially impact the breakdowns in fluency. We are also working on increasing Theo’s confidence, his volume and motivation to communicate when breakdowns occur. Theo is a delightful little boy, and it has been a pleasure working with him and getting reacquainted with him and the key people in his life.”