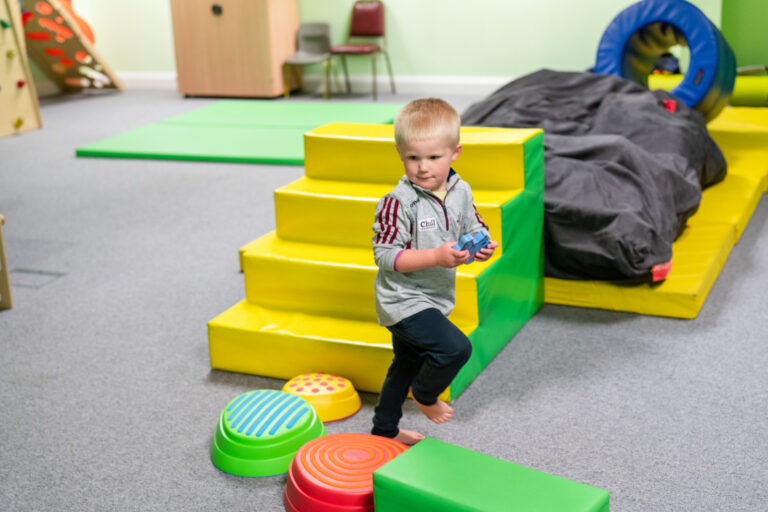 Dylan, age 4 from Skibbereen, Co. Cork has been attending OT and SLT at Sensational Kids in Clonakilty for the past 6 months.  Dylan is a bright, energetic and fun-loving boy with a diagnosis of ASD.

Sarah Crowley, Paediatric Occupational Therapist at Sensational Kids says, “I have been working with Dylan and his family to create a sensory diet which consists of activities that he uses throughout the day to help feel calm, alert, and in an “optimal” state of arousal.   Sensory tools and equipment we use, include chewy tubes, weighted equipment, and ear defenders. Due to improved regulation Dylan is now engaging for longer periods of time in activities. He is now seeking joint attention and shared enjoyment in activities, which was one of our first therapy goals.”

Sarah adds, “together with his family, we are also working on Dylan’s play skills including his turn taking and sharing, which have both improved allowing for more successful engagement with his peers and siblings. Dylan has been benefitting from using visual schedules in sessions at home and at school, which increase predictability and support transitions. This helps Dylan to move from environments and between activities with greater ease. Dylan has many strengths including his keen interest and ability to complete jigsaws and Lego, his memory, his overall strength and endurance, his problem-solving skills and his caring nature. He has made lovely gains so far and with the ongoing support we strive to support Dylan in becoming as independent as possible in his activities of daily living and to reach his full potential.”

Róisín O’Sullivan, Paediatric Speech & Language Therapist at Sensational Kids in Clonakilty also works with Dylan and says, “Dylan’s ability to imitate and repeat words has increased over the last number of months. His vocabulary has increased through language stimulation at home and in therapy sessions. Dylan uses some Lámh signs to communicate and uses some words to comment on things he is seeing and might want. Dylan is making lovely progress and developing on his expressive language skills. Sarah and I work closely on Dylan’s progress and he really is a joy to work with and I love our sessions.”